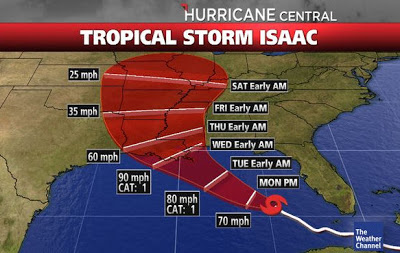 The danger to the GOP convention has mostly ended as Isaac sets its sights on the Gulf coast. Wednesday, the day the storm is forecast to make landfall as a Category 1 hurricane, is the seventh anniversary of Hurricane Katrina slamming into New Orleans.

Hurricane warnings have been issued for portions of the northern Gulf Coast as Tropical Storm Isaac continues its west-northwestward march into the Gulf of Mexico. Isaac poses a potential serious threat to portions of the northern Gulf Coast Tuesday into Wednesday. All interests from Louisiana to Mississippi, Alabama and the Florida Panhandle should watch the progress of Isaac closely and begin to make preparations. Even areas as far west as extreme southeast Texas should continue to monitor Isaac’s progress in case a farther west track materializes. Hurricane warnings have been issued from just east of Morgan City, La. to Destin, Fla. This includes New Orleans, Biloxi, Gulf Shores, Pensacola Beach, and the Destin/Ft. Walton Beach area. Hurricane watches are now posted as far west to Morgan City, La.