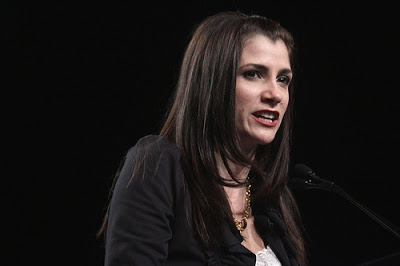 Not satisfied with paying Ann Coulter to tell them that they don’t deserve equal rights because they “aren’t black,” GOProud will be hosting vicious homophobe and Breitbart editor Dana Loesch at their Homocon 2012 party during the Republican Convention. Here’s how they are spinning the event:

“Homocon 2012 will be the must have ticket for the RNC,” said Jimmy LaSalvia, Executive Director and Co-Founder of GOProud. “Our special guests will be a who’s who of the conservative movement.” GOProud is the only national gay organization that has endorsed former Massachusetts Governor Mitt Romney’s bid for President, and Homocon is the organization’s signature annual event. Homocon 2012 is scheduled to take place on Tuesday night during the convention – after the evening session ends – at the Honey Pot nightclub in the trendy Ybor City portion of Tampa. GOProud expects to have close to 1,000 in attendance.

“The left would like America to believe that it has a monopoly on gay people, and that only big government policies are good for gay Americans,” continued [Chris] Barron. “Worse the left wants America to believe that all conservatives are anti-gay. Nothing could be further from the truth, the truth is that conservative policies and limited government are better for all Americans – especially gay Americans. Further, gay conservatives are an important part of the conservative movement and this event will highlight that.”

Nothing could be further from the truth? Need I remind you that last week Dana Loesch screamed at a radio show caller that if somebody supports marriage equality they obviously “hate Christ”? Here’s more of Loesch totally not being anti-gay:

Government has no place in marital affairs and Christians themselves should have protested the moment that government observance morphed into interference; government regulation gives the false impression that marriage is just a fancy name for “union” and not, in fact, a blessed union by observance of faith. Government has no place to dictate to people of faith or to any other community.

When it comes to gay marriage– to be frank, I believe the left uses gay people as pawns. I believe they use gay people and lesbians pawns against conservatives. They don’t care about rights; otherwise, they would be more critical of how they’re oppressed and murdered in Islamic countries. But it’s used as a wedge between citizens and the church.”

Republicans don’t believe that marriage is a state invention: they believe that it is divine and that to force people of faith to redefine their religious beliefs and practices to include behavior which is discussed in Scripture as being not one with which God jives – is actually the government breaking “separation of church and state.” Why is it that when the subject of rights comes up, people of faith are the ones that must compromise their rights, a practice instituted by a faith that they alone observe? How is it unequal that everyone can enter into the same civil agreement but those who follow a faith that others do not seek divine blessing on their union?

In addition to being one of the media’s more visible and vicious homophobes, GOProud’s hero and paragon of Christian Love™ said this about the scandal involving U.S. Marines urinating on the corpses of Afghanis:

Can someone explain to me if there’s supposed to be a scandal that someone pees on the corpse of a Taliban fighter? Someone who was — as part of an organization murdered over 3,000 Americans? I’d drop trou and do it, too. That’s me, though. I want a million cool points for these guys. Is that harsh to say? Come on, people. This is a war.

GOProud has promised more “surprise guests” at Homocon 2012 and Jimmy LaSalvia told me on Twitter recently that he is especially looking forward telling me their biggest reveal. I can’t see how they can possibly top Dana Loesch unless they’ve roped Bryan Fischer himself into making an appearance.

Previous Flow Chart Of The Day
Next ChatRoulette Call Me Maybe