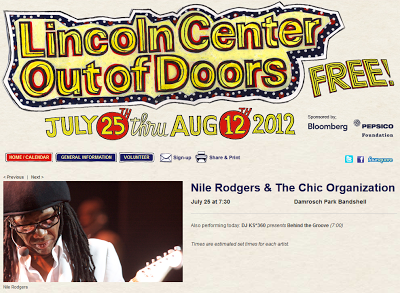 I’d have given you an earlier notice, but I only found out last night. Five or six years ago I was very lucky to attend Chic’s 25th anniversary concert at Webster Hall, after which Nile Rodgers generously hung around to sign a million autographs, including one for me. I’m such a huge fan of his, it pains me to single out one example, but let’s go with the below stone Chic classic from 1978. (Tragically, Chic bassist Bernard Edwards died in his hotel room shortly after the finish of this 1996 concert in Japan.)

RELATED: For a couple of years Rodgers has been waging a very public battle with prostate cancer, which he chronicles almost daily on his personal blog Walking On Planet C. I check in on it frequently.

Previous FLORIDA: Tampa’s Titty Bars Are Gearing Up For The Republican Convention
Next Scotland To Introduce Marriage Bill