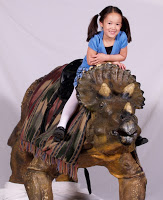 Where Dinosaurs Have Saddles

Creationists freeped the online poll of a popular travel site to place Kentucky’s Creation Museum as the #1 place that “any kid should see before the age of 15.” And now they’re all butt-hurt because the site refused to list the freeped result.

The creation science group that runs the museum, Answers in Genesis, expressed disappointment. The group said, “Curiously, despite being a clear winner in terms of votes received, the Creation Museum does not appear on the Budget Travel List.” Noting the company explanation that the Creation Museum did not fit into a “universal appeal” profile, the ministry said, “We are certainly aware many evolutionists fear exposing children to the sort of critical thinking encouraged by a visit to the Creation Museum. And while we never discourage parents from taking their children to museums such as the number two choice on Budget Travel’s list – the Field Museum of Chicago, home of ‘the biggest Tyrannosaurus rex fossil ever dug up’ – we do suggest they go armed with a bucketful of discernment.”