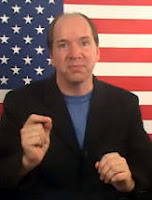 Romney And Satan: Sitting In A Tree

“Romney thinks Jesus is a created being, the spirit brother of Lucifer. Christians believe that Jesus is the Second Person of the Godhead, God eternal. Mormons also think men become a God. This is considered evil by Christians. Romney brought homosexual sin to schools in Massachusetts. Scripture teaches that voting for non-Christians causes economic decline and removes freedom. If you love Jesus Christ for dying for your sins, you won’t betray Him by voting for Romney or Obama. God says Obama and Romney are ‘accursed’. – Pastor Steven “Jazz Hands” Andrew, calling for real Christians to vote for Ron Paul.

Previous College Kids Against Amendment One
Next AFA Versus Campell Soup