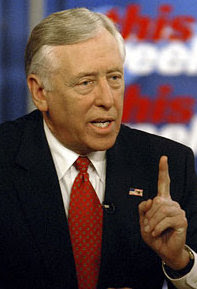 “I have believed that the phrase ‘civil union’ was an appropriate definition of a relationship that is both different and the same between two people of the same sex. And I have believed strongly that such couples must be treated equally under the law. Because I believe that equal treatment is a central tenet of our nation, I believe that extending the definition of marriage to committed relationships between two people, irrespective of their sex, is the right thing to do and will not, in any way, undermine the institution of marriage so important to our society nor impose a threat to any individual marriage. It will, however, extend the respect due to every one of our fellow citizens that we would want for ourselves and our children.” – House Minority Whip Rep. Steny Hoyer (D-MD), coming out for marriage equality. Hoyer’s statement calls the denial of marriage to gay people a “variation of the miscegenation issue.”