Quote Of The Day – Ted Nugent 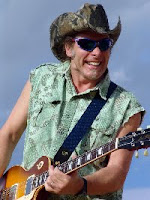 “If the NBA had any true gay convictions, the NBA should host a Homosexual Night. During halftime, the homosexuals could come down on the court, hold hands and prance around the court to music by the Village People. The NBA could then give each homosexual a pink basketball as a symbol of solidarity. Like other professional athletes, numerous NBA players have done all kinds of things on and off the court that do not cast a positive light on themselves or the NBA, but they have not been fined $100,000 by the league. Homosexuals are a protected class in America. If you think what happened to Mr. Bryant was a travesty, just wait until you see what homosexuals in the military do when they claim they have been mistreated because of their sexual orientation.” – Washed up rocker Ted Nugent, writing for the Moonie Times.