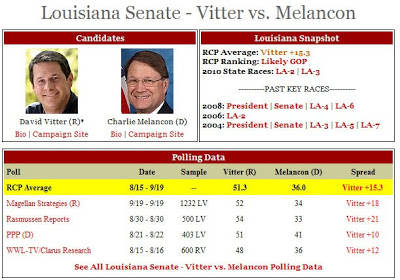 The voters of Louisiana are clearly unconcerned with the admitted hooker patronage of “sanctity of marriage” defender, conservative Christian, and serial adulterer Sen. David “Diaper Boy” Vitter. As one of the Senate’s chief sponsors of the (failed) Federal Marriage Amendment, Vitter called the banning of same-sex marriage “the most important issue” before Congress. He also said that gay marriage would wreak a devastation on Louisiana comparable to hurricanes Katrina and Rita. And then he pulled $500 from the ATM, put on his diaper, and called Mistress Kandi.