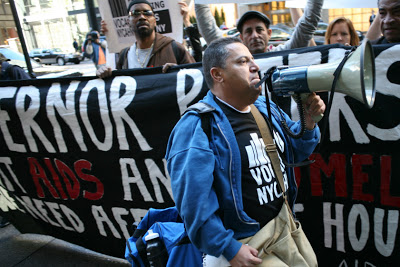 AIDS activists protested outside the Manhattan office of Gov. David Paterson today over his reneging on a pledge to support a bill that would cap the rents of people with AIDS at 30% of their income. Via press release from Housing Works:

Paterson had agreed to sign the 30 percent rent cap bill in both 2009 and 2010, but went back on his promises yesterday, claiming that it would prove too expensive during a difficult budget year. Since, City Council Speaker Christine Quinn, as well as council members Annabel Palma and Helen Diane Foster, have sharply criticized the governor’s action. The bill would have helped nearly 10,000 low-income New Yorkers with HIV/AIDS, according to July numbers released by the HIV/AIDS Services Administration, by capping their rent at 30 percent of their income. Today, a state policy forces many poor state residents with HIV/AIDS to pay as much as 75 percent of their income toward rent, causing them to make difficult choices between medical care and paying their landlords.