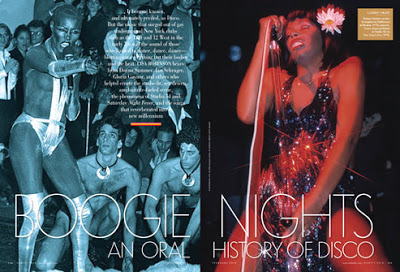 An Oral History Of Disco Vanity Fair has published a lengthy series of quotes from people who were around during the early years of disco, including Judy Weinstein, Donna Summer, Giorgio Moroder, Ian Schrager, Gloria Gaynor, Nile Rodgers, and Fran Lebowitz. The piece by Lisa Robinson opens:

It became known, and ultimately reviled, as Disco. But the music that surged out of gay underground New York clubs such as the Loft and 12 West in the early 70s was the sound of those who wanted to dance, dance, dance—blotting out everything but their bodies and the beat. The author hears from Donna Summer, Ian Schrager, Gloria Gaynor, and others who helped create the strobe-lit, sex-driven, amyl-nitrite-fueled scene, the phenomena of Studio 54 and Saturday Night Fever, and the songs that reverberated into a new millennium.

Although NYC’s gay nightclubs are widely credited as having been the birthplace of disco, few gay men are quoted in the piece. We know why that is.