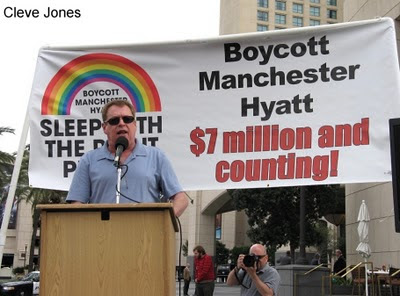 With the boycott of the San Diego Manchester Hyatt now in its second year, hundreds rallied outside the hotel yesterday to protest that the American Historical Society chose to cross picket lines and hold a convention there. Rex Wockner:

Close to 300 people staged a raucous demonstration at the Manchester Grand Hyatt hotel in San Diego on Jan. 9 to protest the American Historical Association’s decision to go ahead with its annual meeting there rather than honor the gay boycott of the hotel. The boycott was launched in mid-2008 after hotel owner Doug Manchester donated $125,000 to the campaign to put Proposition 8 on the ballot. The constitutional amendment passed in November 2008, repealing same-sex marriage in California.The AHA said its contracts with the Hyatt were in place long before anyone had heard of Prop 8 and that it would have cost the association around $800,000 to move the Jan. 7-10 convention. Instead, the AHA staged a free-to-the-public, 15-part miniconvention at the Hyatt “to explore historical perspectives on same-sex marriage.”

Previous An Oral History Of Disco
Next CougarGate: Iris Did Kirk’s DAD Too, Scandal May Bring Down Government