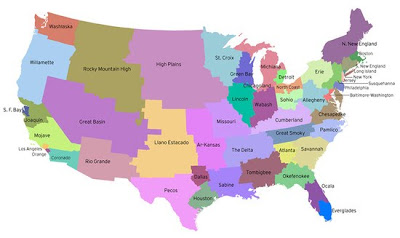 Via the Atlantic, here’s what the states might look like were their borders redrawn every ten years to reflect population changes, as is done with congressional districts. The Electoral Reform Map:

Rather than replacing a time honored system that, after all, has only broken down three times in over 200 years, the organization of the states should be altered. In 2000, the Census Bureau determined the United States population to be 281,421,906, distributed in 50 states and one federal district. The states ranged in population from to 493,782 (1) to 33,871,648 (2). This Electoral Reform Map redivides the territory of the United States into 50 bodies of equal size – 281,421,906 divided by 50 is 5,616,997. This map shows one possible way to redraw the fifty states (3). The map was laid out with no political orientation or wealth. As a result, states may be favor one or the other parties. A map redrawn to be result in states that, politically, individually reflect the entire nation would be interesting to see. A map that divided that states evenly according to wealth would also be interesting.

Embiggen the map for the new names of some states.