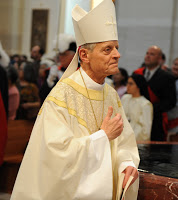 The authors of the anti-gay Manhattan Declaration, which calls for the disobedience of any laws granting LGBT rights, want to increase its number of signatories from 370,000 to one million. Working to help them reach that noble goal are Catholic archbishops. Via press release:

Cardinal Rigali of Philadelphia (right), Archbishop Wuerl of Washington, DC (left), Archbishop Dolan of New York and Archbishop Kurtz of Louisville reached out to all of their brother Catholic bishops asking them to spread this document throughout their dioceses and encourage their clergy and faithful to study it and join as signatories. The Archbishop of Detroit has planned a grassroots effort throughout his archdiocese. The Bishop of Phoenix has already organized a grassroots effort there. We are also receiving many reports of evangelical gatherings in a number of areas – and many evangelical pastors referring to the Manhattan Declaration in their sermons. This bold and exciting movement needs to reach 100 or 200 cities in America. Why not? Can you help? We are urging you to encourage your pastors and community leaders to do what these other cities are doing. Organize ecumenical meetings organized around the Manhattan Declaration; get other concerned citizens to join the effort. Get on the internet or phone and ask friends to join you.

After a raft of suggestions on how to increase the number of signatures (Use Facebook! Twitter! Hair salons! Barbeques!), the authors close with: “Just think what might happen in our land if one million courageous Christians declared their uncompromising allegiance to Jesus Christ and to biblical faithfulness on some of the most urgent moral issues of our day. May God give us the strength to do what He is so clearly calling us to do. From our perspective, this is a cause worth giving every last ounce of effort and energy we have.”

And once again, the moral and Godly oppression of natural human sexuality is aided by elderly drag queen eunuchs in embroidered gowns, gaily waving their smoking purses all the way to the NAMBLA meeting.

Previous This Is The Sound Of Hate
Next Broadway Friday