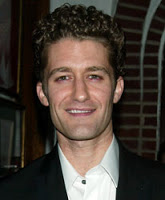 – Tony nominee and Glee star Matthew Morrison has signed a recording contract with Mercury Records for his first solo album to be released in fall.

– The first NYC revival of Tony Kushner’s Pulitzer Prize-winning Angels In America opens Off Broadway on September 14th at the Signature Theater. The two parts of the play will be performed on alternating nights. All seats will be $20.

– Tony nominees Keith Roberts and John Selya will star in the Broadway debut of Twyla Tharp’s Frank Sinatra jukebox musical, Come Fly Away, which begins previews at the Marquis Theatre on March 1st.

– Golden Girls star and former Broadway performer Rue McClanahan, 75, is recovering from a stroke suffered following her November heart bypass surgery. Said to be slowly improving in a nursing facility, she is reported to have difficulty speaking. We wish her well!

– The Broadway production of Billy Elliot has recouped its $14M start-up cost in its 14th month at the Imperial Theatre.

– Tangled Web: The troubled Spider-Man: The Musical is offering refunds to ticketholders because the show will not open on February 25th as scheduled. No start date for the $50M production, the most expensive in Broadway history, has been announced.

– Broadway Cares/Equity Fights AIDS will stage Broadway Bares: Solo Strips at Splash on January 31st. “Seven of the hottest men on Broadway” will dance at 8pm and 11pm. $10 donation at the door. The 20th edition of Broadway Bares takes place at the Roseland Ballroom on June 20th. The show gots its start at Splash.