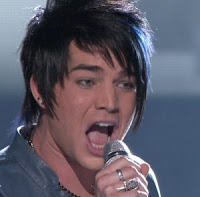 ABC has canceled another Adam Lambert appearance, this time for an episode of Jimmy Kimmel Live scheduled for next week.

That naughty American Music Awards performance isn’t going to be behind Adam Lambert anytime soon. Even after his well-received performance on “The Early Show” last week, ABC continues to feel uncomfortable around Lambert. His Dec. 17 “Jimmy Kimmel Live” appearance was canceled today–news Lambert himself delivered on his Twitter page an hour ago. The performance on Kimmel’s live stage was scheduled before Lambert made his now infamous debut on the AMAs on Nov. 22. In one of his tweets about the matter, Lambert told his fans not to blame ABC but rather “It’s the FCC heat.” It’s not clear whether ABC told Lambert to put the blame there or if the “American Idol” runner-up is making his own assumptions.

But we do know the following: The FCC doesn’t monitor programming after 10 p.m. Don’t believe us? The following is an excerpt from its website: “The FCC has determined, with the approval of the courts, that there is a reasonable risk that children will be in the audience from 6 a.m. to 10 p.m., local time. Therefore, the FCC prohibits station licensees from broadcasting indecent material during that period. “Material is indecent if, in context, it depicts or describes sexual or excretory organs or activities in terms patently offensive as measured by contemporary community standards for the broadcast medium…The ‘safe harbor’ refers to the time period between 10 p.m. and 6 a.m., local time. During this time period, a station may air indecent and/or profane material.”

Reading Lambert’s Twitter feed, it appears that this latest cancellation may include a New Year’s Eve performance, but no specific show is named. Meanwhile music fans point to the below 2004 performance by Pink which included simulated male/female oral sex but resulted in zero public outcry or discipline by networks.