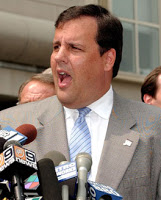 The New Jersey Star Ledger, the state’s largest newspaper, yesterday published an editorial warning governor-elect Chris Christie not to interfere in the legislature’s coming vote on same-sex marriage by attempting to influence the voting.

Within the next several weeks, probably in early December, the Legislature will take up the question of gay marriage. This will be high political drama. Because while most Democrats support marriage equality, they do not have nearly enough votes to pass it on their own. They need Republican support if the measure is to have any chance. And that means Chris Christie, the Republican governor-elect, is about to make his first really important decision. He opposes gay marriage and said during the campaign he would use his veto power as governor to block it.

But will he try to intervene now, before he takes office, by pressing his fellow Republicans to oppose marriage equality? His decision will tell us a great deal about his priorites as governor. Because if Christie jumps into this debate, he will pay a price. He will drive a wedge between himself and the Democratic leadership of the Legislature even before he swears his oath. He will anger the many voters who support gay marriage with passion. And perhaps most important, he will ensure that this debate continues into his term, distracting attention from the crushing agenda he faces during this economic crisis. After basing his campaign on jobs and taxes, he will have opened a second front over a social issue.

The editorial goes on to quote Christie’s (so far) comparatively soft statements on same-sex marriage, noting that he’s “never invoked God’s will” or called gay people deviant. But you can bet that NOM and the New Jersey Family Policy Council are right this minute pressuring Christie to step up his rhetoric.