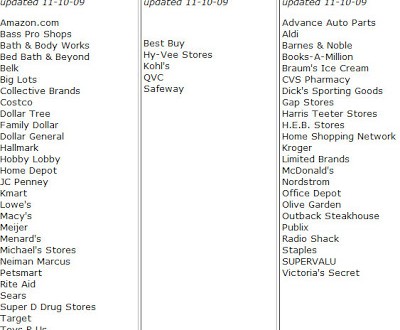 After last week announcing a boycott of all stores under the GAP umbrella because its three chains don’t use the word “Christmas” in their holiday ads, this weekend the American Family Association published an expanded list of national retailers “for and against Christmas.”

Based on current advertising, below is a list of companies that avoid, ban, or use the term “Christmas” in their advertising. We will continually update the list, so check back often. Criteria – AFA reviewed up to four areas to determine if a company was “Christmas-friendly” in their advertising: print media (newspaper inserts), broadcast media (radio/television), website and/or personal visits to the store. If a company’s ad has references to items associated with Christmas (trees, wreaths, lights, etc.), it was considered as an attempt to reach “Christmas” shoppers. If a company has items associated with Christmas, but did not use the word “Christmas,” then the company is considered as censoring “Christmas.”