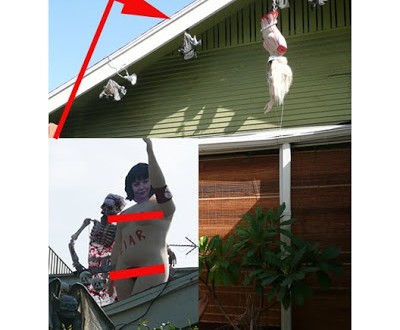 The WeHo Effigy Guys Are Back You may recall the gay couple from West Hollywood who last Halloween raised the ire of the right wing with an effigy of Sarah Palin, which they later took down after complaints from neighbors. Well, they’re back – this time with a nude Maggie Gallagher with her arm raised in a Hitler salute. Via Curbed LA:

More about what’s on the roof this year, according to the pair, who work in the window display business: As noted, there’s a mannequin with a photo of Gallager, President of the Institute for Marriage and Public Policy, an organization that opposes gay marriage. She’s also has the word liar written on her stomach. “The reason that she is naked is that we are exposing her lies,” says Morrissette, who calls her a hypocrite for statements he says that she made about educating children about gay marriage. Glinda, the good witch, is also on the roof, standing next to a Mormon missionary (he’s stuck in a chimney and on fire). Glinda is there to counteract all the evil of the rest of the characters….including Carrie Prejean, the Miss USA 2009 contestant. She’s the gal who said she believed that marriage should be between a man and a woman–and she’s shown chopped in half and bloodied.