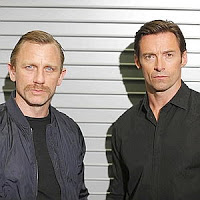 – Starpower: Daniel Craig and Hugh Jackman delivered record-setting opening week receipts for A Steady Rain. The show grossed $1.1M, a new plateau for a non-musical production. Could it be the $376 “premium seating”?

– Cheyenne Jackson is rumored to be joining the cast of 30 Rock.

– Hair stars Gavin Creel and Will Swenson have had their caricatures added to the Wall of Fame at Sardi’s.

– The revival of West Side Story is in the black, having recouped its producers’ investment of $14M in eight months. It continues to play to packed houses.

– The musical version of Priscilla, Queen Of The Desert will premiere on Broadway in the spring of 2011 after a fall 2010 tryout in Toronto.