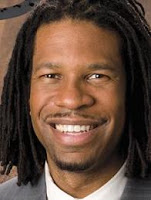 “While those who were at Stonewall talk about the fear of being arrested by police, 40 years ago, blacks talked about the fear of dying at the hands of police and not having their bodies found or murder investigated. The 13th Amendment was signed in 1865, and it wasn’t until 1948 that President Harry S Truman desegregated the military. That’s more than an 80-year gap.

“Not to be flip, but Miley Cyrus is older than Bill Clinton’s “don’t ask, don’t tell.” That doesn’t mean that the safety of gay people should be trivialized or that Obama should not be held accountable for the promises he made on the campaign trail. But to call this month’s first-ever White House reception for GLBT leaders “too little too late” is akin to a petulant child throwing a tantrum because he wants to eat his dessert before dinner. This is one of the main reasons why so many blacks bristle at the comparison of the two movements — everybody wants to sing the blues, nobody wants to live them.

“This lack of perspective is only going to alienate a black community that is still very proud of Obama and is hypersensitive about any criticism of him, especially given he’s been in office barely six months.

“If blacks are less accepting of gays than other racial groups — and that is certainly debatable — then the parade of gay people calling Obama a “disappointment” on television is counterproductive in gaining acceptance, to say the least. And the fact that the loudest critics are mostly white doesn’t help matters either.

“Hearing that race matters in the gay community may not be comforting to hear, but that doesn’t make it any less true.” – ESPN columnist LZ Granderson, from his CNN.com opinion piece Gay Is Not The New Black.