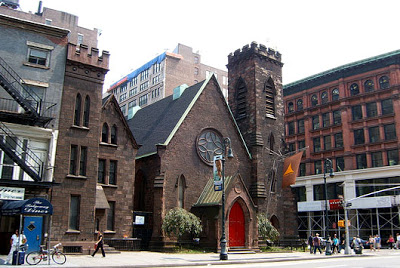 Chelsea’s notorious Limelight, the nightspot that gave us club kids, Amanda Lepore, and a murdered drug dealer or two, is finally about to reopen as a sort of mall. PageSix reports that the venue will be called Limelight Marketplace.

Jack Menashe, who owned nightclub Lounge in SoHo, is turning the long-vacant, 1849 Gothic Revival church into Limelight Marketplace with the help of designers James Mansour and Melisca Klisanin. Mansour told John Norwood of guestofaguest.com, “We’re taking a place that was a blight on the neighborhood for so long and turning it into a shopping haven.”

After original Limelight owner Peter Gatien was deported to Canada, the building sat unused before resurrecting for a few years as a disco called Avalon. The movie Party Monster was based on the habitues of the Limelight.