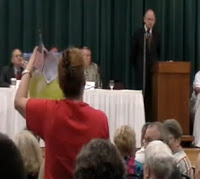 Remember the loony red-shirted birther who made international news when she hijacked Rep. Mike Castle’s town hall meeting? It turns out that she is well-known around Delaware as “Crazy Eileen.” Conservative radio host Jared Morris has posted a YouTube clip of her calls.

In a call from a January show, on New Year’s predictions, the woman discusses aliens, angels and the end of life on Earth, according to an audio clip Morris posted on YouTube this week. In a videotaped introduction, Morris said the woman featured on the YouTube video from the meeting was a regular caller to his program. “I want you guys to know exactly who you were cheering,” Morris said in the clip. She repeatedly has called Obama “the antichrist” on the airwaves, and “her phone calls have turned to faxes and threats,” according to Morris. “I have actually talked to an angel who came down in human form,” she said during the Jan. 1 show. “We will have alien contact in October of this year, in the southwestern USA.” One prediction may seem ironic in light of the anger expressed in her diatribe toward Castle: “There will be peace among men and negativity will end,” she told Morris.

Crazy Eileen, the new wingnut hero. You have to love it.