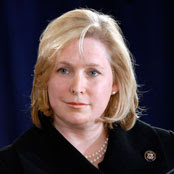 Jason Bellini reports at the Daily Beast that while Sen. Kirsten Gillibrand says she doesn’t have the support necessary to force the suspension of the enforcement of DADT, she has obtained a commitment that the Senate Armed Services Committee will hold hearings on the issue this fall.

A statement from the Gillibrand’s office, shared exclusively with The Daily Beast, notes that “265 men and women have been unfairly dismissed from the Armed Forces since President Barack Obama took office.” Gillibrand’s fast-track proposal for halting DADT, an amendment to the Military Reauthorization Act that would have ordered the Defense secretary to stop investigating gay service members, was never introduced. Even with Senate Majority Leader Harry Reid expressing his support, Gillibrand couldn’t gather the 60 votes needed to avoid a filibuster, according to a spokesperson. “I thought it was a long shot from the very beginning,” says Aubrey Sarvis, executive director the Servicemembers Legal Defense Network, an organization fighting for the end of DADT. “Clearly one of the positive things that came out of the Gillibrand amendment was that it served as a catalyst for hearings,” he added.

Bellini notes that Rep. Patrick Murphy’s bill to repeal DADT has close to the 218 votes needed to pass.