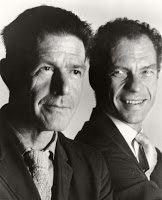 Famed choreographer Merce Cunningham, the longtime partner of the late minimalist composer John Cage, has died in NYC at the age of 90.

A compelling dancer himself, Cunningham created a body of work that questioned the traditional premises of dancing, providing unique answers that were both baffling and beautiful. “What interests me is movement,” Cunningham said in a 2005 interview with Bloomberg News. “Not movement that necessarily refers to something else, but is just what it is. Like when you see somebody or an animal move, you don’t have to know what it’s doing.” Some aficionados found Cunningham’s work inscrutable. Others found it absorbing and wholly original in the worlds of modern and classical dance. Watching it could be like taking a quiet walk alone, open to the fluctuating qualities of landscape and weather. To some admirers, it was the only game in town. Cunningham never made things easy for his audience. His dances shunned narrative and character. They were simply about dynamic human bodies moving in space. Occasionally the work assaulted the spectator. The 1964 “Winterbranch,” with its Sisyphean movement, its darkened stage from which lights shone full blast into the viewers’ eyes and its abrasive La Monte Young score had people exiting the theater in droves.

Cunningham began his career as a dancer for Martha Graham in 1939. Much of his work was in collaboration with John Cage, who was also his life partner for more than 50 years.