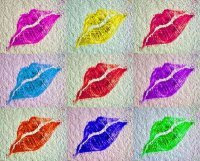 A nationwide kiss-in is planned for 15 cities on August 15th.

The Great Nationwide Kiss-In is scheduled for Aug. 15. Events are planned for at least seven cities, including Boston, New York, Houston, Portland, Ore., and three California cities — Irvine, San Diego and San Francisco. A Web page and Facebook page promoting the demonstrations says more events are in the works. A pair of bloggers, David Badash, of New York, and David Mailloux, of Boston, are behind the plans. They say the events are not a protest against those who oppose gay rights. But they say people should be allowed to freely express their affection.