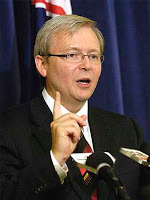 Australian PM Kevin Rudd: I Said No Gay Marriage And I Meant It Australian prime minister Kevin Rudd is “pushing back” against a Labor Party call for the federal government to legalize same-sex marriage.

Mr Rudd says he will not change the policy he took to the last election. “We went to the last election being very clear-cut about our position on marriage under the Marriage Act being between a man and a woman,” he said. “We’ve also said that in terms of all legal discriminations against same-sex partners that we would act to remove them, and the Attorney-General has been hard at work.”

The Labor Party’s national conference is taking place this week.