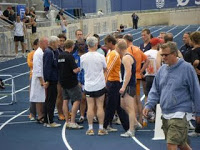 The World Outgames in Copenhagen were interrupted yesterday when four explosive devices were hurled onto a running track. One athlete suffered an injury to his hand. American competitors Sam Felker and Keith Little write on their blog:

The camaraderie of the Outgames was temporarily broken this afternoon when unknown assailants tossed two explosive devices onto the track during the start of a relay,” the men wrote on their blog. “One runner who was in a starting position near the explosions sustained a minor injury to his hand and was treated at the scene by paramedics. The large crowd of athletes and spectators was stunned by what can only be described as a hate crime attack. Competition resumed after consulting with the athletes who were determined not to let this incident succeed in stopping the Outgames. Police were called to the scene and were searching the premises when two more devices exploded on the track. Shortly thereafter the police arrested a suspect who was seen fleeing from a nearby church tower where it is believed the attack was launched. Police are still searching for a second suspect.

On Saturday, two local men were also arrested for the gay-bashings of three visiting athletes in central Copenhagen. All three victims were hospitalized after being kicked and beaten. There are 5000 competitors at this year’s Outgames.

Previous Australian PM Kevin Rudd: I Said No Gay Marriage And I Meant It
Next CNN’s Lou Dobbs: Rachel Maddow
Is A “Tea Bagging Queen”