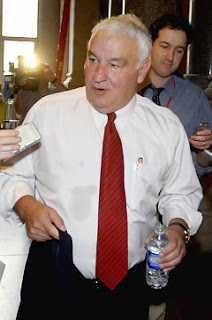 Blame It On The Blackberry By all accounts, Monday’s NY Senate coup was orchestrated from behind the scenes by billionaire Tom Golisano, a thrice-failed NY gubernatorial candidate. Golisano has funneled millions to Democratic candidates over the years, but had become increasing annoyed when the finally-in-power Democrats in the Senate refused to jump to his commands, even announcing that he was moving to Florida rather than pay NY taxes. The final straw, according to Golisano, came when (now desposed) Majority Leader Malcolm Smith fiddled with his Blackberry rather than pay attention to him during a meeting.

Upstate billionaire Thomas Golisano said he began plotting to overthrow Senate Majority Leader Malcolm Smith after the Democrat spent a whole meeting in late April reading e-mails. “Of course I was upset, I thought that was very rude,” he said of the meeting in Smith’s office. “When I travel 250 miles to make a case on how to save the state a lot of money … and the guy comes into his office and starts playing with his BlackBerry, I was miffed.” Golisano, who spent millions helping Democrats take control of the Senate for the first time since 1965, said Smith and party leaders reneged on a promise of reform and engaged in a secretive budget process that resulted in $8 billion in new taxes and fees. After the meeting, Golisano, who founded the Independence Party, asked political operative Steve Pigeon to see if he could work a deal with Republicans.

According to the NY Daily News, the final details of Monday’s revolt were laid out by Golisano over the phone from his Florida home. Golisano made his billions by founding the payroll company Paychex, and owns the Buffalo Sabers pro hockey team.