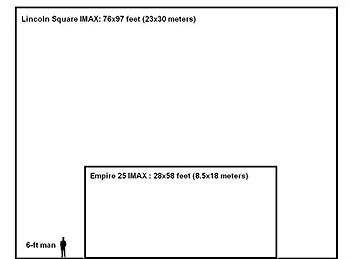 Some Star Trek buffs are pissed after paying $17 to see the movie in IMAX at AMC’s flagship Times Square megaplex, only to find a normal size screen. The flap really got rolling earlier this week when actor/comedian Aziz Ansari went ballistic on his blog, describing how AMC management refused to refund his ticket. The CEO of IMAX has weighed in, essentially calling Ansari a crybaby. IMAX has been “expanding the brand” into several normal sized theaters around the country.

Wikipedia has a detailed and complicated explanation of the technical aspects to an IMAX presentation, which requires that special cameras be used in the filming. Which weren’t used for Star Trek, although the film was digitally remastered using IMAX technology “that eliminates grain, digital artifacts, increases contrast and brightness.” But all that is hooey to folks who go in expecting the giant screen.