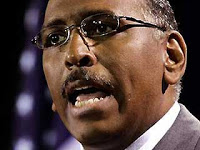 Michael Steele Is SO Gonna Be Fired As if he wasn’t in enough trouble with the all the back and forth with defacto GOP head Rush Limbaugh, nominal GOP head Michael Steele has now totally signed his own death warrant. From an interview with GQ, as reported by Political Wire:

On if women have the right to choose an abortion: “Yeah. I mean, again, I think that’s an individual choice.”

On whether homosexuality is a choice: “Oh, no. I don’t think I’ve ever really subscribed to that view, that you can turn it on and off like a water tap. Um, you know, I think that there’s a whole lot that goes into the makeup of an individual that, uh, you just can’t simply say, oh, like, ‘Tomorrow morning I’m gonna stop being gay.’ It’s like saying, ‘Tomorrow morning I’m gonna stop being black.'”

See what he just did? The head of the Republican Party has unwittingly endorsed the comparison between gay rights and black civil rights, the talking point that the wingnuts loooove to dispute. But don’t go feeling all warm and fuzzy about Steele. Remember he’s the same guy who, when asked if he approved of civil unions for gays, said, “What are you, crazy?” Steele thinks being gay is as natural and immutable as being black AND he still thinks we don’t deserve equal rights. He’s still getting fired, though.