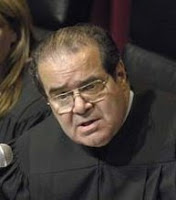 Yes, the “Obama Is Not An American” meme is still going strong in Wingnutistan. World Net Daily is breathlessly reporting that one of their drones got called on at a book signing reception for Supreme Court Justice Antonin Scalia and demanded to know why SCOTUS won’t hear any of the numerous cases filed on the topic. But the answer wasn’t what they wanted to hear.

“I told Scalia that I was an attorney that filed Lightfoot v. Bowen that Chief Justice Roberts distributed for conference on Jan. 23 and now I represent nine state reps and 120 military officers, many of them high ranked, and I want to know if they will hear Quo Warranto and if they would hear it on original jurisdiction, if I bring Hawaii as an additional defendant to unseal the records and ascertain Obama’s legitimacy for presidency.” Taitz said she had some worries asking the question. “I have to say that I prepared myself to a lot of boo-ing, knowing that Los Angeles trial lawyers and entertainment elite are Obama’s stronghold, however there was no boo-ing, no negative remarks,” she said. “I actually could see a lot of approving nods, smiles, many gasped and listened intensely. I could tell, that even Obama’s strongest supporters wanted to know the answer. Scalia stated that it would be heard if I can get four people to hear it. He repeated, you need four for the argument. I got a feeling that he was saying that one of these four that call themselves constitutionalists went to the other side,” Taitz said.

The nine SCOTUS judges are generally considered to be evenly split with four conservatives, four liberals, and one swing voter. Since four justices must agree to hear a case, the wingnuts are dismayed to learn that at least one of “their” justices has apparently refused to allow the petitions to move forward. What a pity.

Previous Α Δ Φ vs. Westboro Baptist Church
Next Michael Steele Is SO Gonna Be Fired