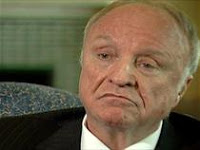 “Homosexuality will always be a sexual perversion. And you say that around here now and everybody goes nuts. But I don’t care. They’re mean. They want to talk about being nice. They’re the meanest buggers I have ever seen. It’s just like the Muslims. Muslims are good people and their religion is anti-war. But it’s been taken over by the radical side. What is the morals of a gay person? You can’t answer that because anything goes. They’re probably the greatest threat to America going down I know of.” – Utah state Sen. Chris Buttars (R), speaking in the documentary, 8 – The Mormon Proposition.

The Utah television station reporting on the documentary says that Buttars goes on to describe a particular gay sexual act he claims is taking place, “but ABC 4 does not consider that appropriate for its news content.”