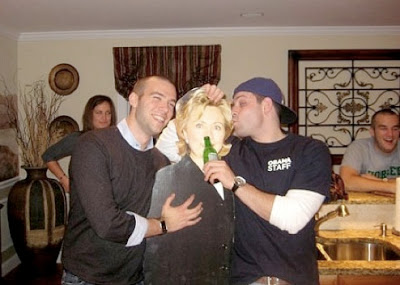 That’s Barack Obama’s head speechwriter on the left, groping a standee of Hillary Clinton, his new co-worker. Via WaPo:

Question No. 58 in the transition team vetting document for the Obama White House asks that applicants: “Please provide the URL address of any websites that feature you in either a personal or professional capacity (e.g. Facebook, My Space, etc.)” Question No. 63 asks that applicants “please provide any other information … that could … be a possible source of embarrassment to you, your family, or the President-Elect.”

For a while there this afternoon, President-elect Barack Obama’s immensely talented chief speechwriter, 27-year-old Jon Favreau, might have been pondering how to address that question. That’s when some interesting photos of a recent party he attended — including one where he’s dancing with a life-sized cardboard cut-out of secretary of state-designate Sen. Hillary Rodham Clinton, and another where he’s placed his hand on the cardboard former first lady’s chest while a friend is offering her lips a beer — popped up on Facebook for about two hours. The photos were quickly taken down — along with every other photo Favreau had of himself on the popular social networking site, save for one profile headshot.

Asked about the photos, Favreau, who was recently appointed director of speechwriting for the White House, declined comment. A transition official said that Favreau had “reached out to Senator Clinton to offer an apology.”

And here the only Facebook photos I’ve had to take down are the ones in which I magically look hammered.

Previous HRC Responds To Beckett Fund Ad
Next Huckabee: Yeah, Gay People Get Beaten – But What About The Stryofoam Cross Lady?