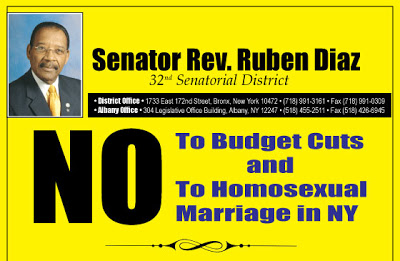 Diaz Steps Up The Hate

Anti-gay New York Sen. Ruben Diaz, the ringleader of New York’s now-infamous “Gang Of Three” dissident Democratic senators, has been distributing the flyer below to the press, apparently in reaction to criticism from gay rights and labor groups. It appears that Ruben “I hate gay people more than I like getting things done” Diaz Sr. is beginning to crack under pressure from groups like the Working Families Party, the Empire State Pride Agenda, and a handful of unions. The outside interests, who support Democratic Senate leader Malcolm Smith in Albany, have been purchasing ads in Bronx papers, passing out leaflets, and circulating petitions urging constituents to voice dissatisfaction with Diaz’s split from his party. The groups have targeted Diaz and fellow rebel Pedro Espada, reports Elizabeth Benjamin in the Daily News, after political negotiations fell through.

Late yesterday Diaz’s office sent out a frantic, brightly colored (but not gay) missive to the press and constituents, saying “NO!” to budget cuts. He decries Paterson’s proposed cuts at length, arguing that the $15.4 billion budget gap can be addressed in “other ways.” (No mention is made of how the state is legally obligated to balance its accounts, nor are alternate suggestions rendered, of course.) Then, just in case you forgot what else he hates, he adds that he does not “support the matrimony of homosexual couples, nor … abortion on demand.” But, he insists, “I am still a Democrat. And I will always be a Democrat.” Because opposing progressive agendas and sabotaging liberal party politics — that’s what Democrats do.

Earlier this month the “deal” between the “Gang Of Three” and possible Senate Majority Leader Malcolm Smith abruptly fell through when Smith finally did the right thing and told the three that he’d rather the Democrats lost the majority than kowtow to their outrageous demands for leadership positions and massive personal budgets.