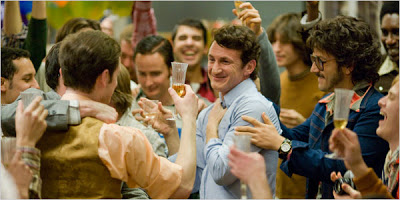 NYTimes: Milk Is A Marvel Milk gets a fantastic review from A.O. Scott in today’s NYTimes. An excerpt:

That power lies in its uncanny balancing of nuance and scale, its ability to be about nearly everything — love, death, politics, sex, modernity — without losing sight of the intimate particulars of its story. Harvey Milk was an intriguing, inspiring figure. “Milk” is a marvel.

Last Wednesday I attended a press conference with most of the cast, director Gus Van Zant, and screenwriter Dustin Lance Black. A lot of the questions were the usual “What was your motivation?” sort of stuff you hear at these things, but several of us asked about Proposition 8 and the timeliness of the film.

Photos weren’t allowed and I didn’t have a voice recorder with me, so here are a few quotes that I scribbled down. Some of them I’ve confirmed as verbatim from published accounts of the press conference.

Sean Penn: “It’s only an issue [Prop 8] because of ignorance in the first place. We don’t have any excuse for being ignorant of the law…or ignorant of human history… In fact any support of Prop 8 would be minimally manslaughter. Because human history tells us that teenage boys are going to hang themselves out of a reach for an identity that they can’t get…. And if this movie is a part of an engine to help reveal that, that’s going to make us all happy and proud.”

Gus Van Zant: “Prop 8 has mobilized and brought everybody together. The young gay community has responded. This is a new energy that’s kind of inspiring.”

Sean Penn: (On the parallels between Harvey Milk and Barack Obama.) “Well, they both used the word ‘hope’.”

Dustin Lance Black: (On first learning about Harvey Milk.) “It was a personal story that I heard as a teenager at a time when I needed to hear it.”

Josh Brolin: (On playing Dan White.) “During the filming, I stayed at my ex-wife’s brother’s place just above the Castro and I was afraid that I was going to be shot if I went down there.” (He was joking.)

I got one question: “We’ve seen some escalating confrontations between the gay and faith communities since the Prop 8 vote and there’s a lot of anger at gay people over their reaction to the vote. How do you think the faith community will respond to this film about what most would see as an entirely sympathetic character?”

There was a moment of uncomfortable silence and I started to regret the question. Gus Van Zant looked at Sean Penn and seemed to toss the question over to him.

Not really an answer to my question, but I’ll take it. Milk opens nationwide today. I suggest taking your family after that nice Thanksgiving dinner.

Previous A Roadblock For Hillary?
Next “Protect DOMA” Site Launched