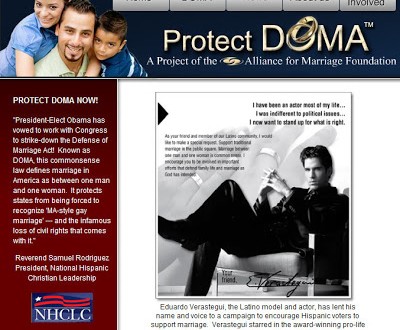 Terrified at the prospect that Barack Obama will actually make LGBT Americans the full citizens they deserve to be, the Christianist right has preemptively launched Protect DOMA, a site designed to build opposition in minority communities to the repeal of the Defense Of Marriage Act.

All of the photos and quotes on the main page are from black and Latino people, including the notoriously closeted Mexican-American actor Eduardo Verastequi. Funded by the Alliance for Marriage Foundation, the site’s list of their board of directors is a who’s who of black, Latino, and Asian religious leaders, as well as one Muslim imam. The logo for the Hispanic Evangelicals Coalition is on the main page.

From their press release:

“The repeal of DOMA is the legislative Holy Grail for activists who want to impose their radical social agenda upon America through the courts,” said Rev. Sam Rodriguez, Jr., an AFM Advisory Board Member and President of the National Hispanic Christian Leadership Conference (NHCLC). “As demonstrated in California, over 70% of the African-American community rejects the utterly false argument that gay activists have a ‘civil right’ to redefine marriage for our entire society,” said Niger Innis, an AFM Advisory Board Member and National Spokesman for the Congress of Racial Equality.

Previous NYTimes: Milk Is A Marvel
Next Put A Ring On It