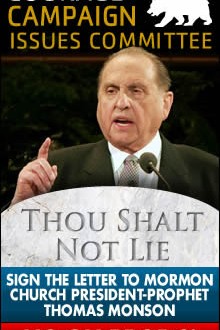 LGBT activists in California are collecting petition signatures asking the Mormon Church to stop meddling in the gay marriage issue.

The Courage Campaign contends church leaders have “intimidated” members of The Church of Jesus Christ of Latter-day Saints into giving millions of dollars to the Yes on 8 campaign.

On Nov. 4, California voters will decide whether to approve Proposition 8, a constitutional amendment that would ban gay marriage in that state.

In a Thursday news release, Courage Campaign founder Rick Jacobs says he’s collecting signatures and plans to deliver a petition to a church temple in Los Angeles on Tuesday.

The petition asks Monson to stop funding and advocacy for the proposition and stay out of California politics. “We fully respect your religious freedoms, but your freedoms do not include the ability to take away rights from anyone,” the petition reads. The petition was posted online Thursday and was rapidly collecting signatures, Jacobs said.

Mormon leaders insist that they are not intimidating church members into contributing to Yes On 8, only “inviting” them to give money. As much as 75% of the Yes On 8 money comes from the Mormons.

I am supremely skeptical that the Courage Campaign would turn the Magic Underwear crowd around, but go here to sign their petition anyway. It can’t hurt and at least YOU will feel a little better.

PREVIOUSLY ON JMG: The Courage Campaign demands that Rep. David Dreier come out of the closet.