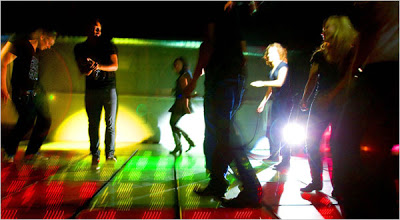 A nightclub in Rotterdam is using a dance floor that generates energy from the movements of the dancers.

If you felt that the atmosphere in the new hip Club Watt was somehow electric, you would be right: Watt has a new type of dance floor that harvests the energy generated by jumps and gyrations and transforms it into electricity. It is one of a handful of energy-generating floors in the world, most still experimental. With its human engineering, Watt partly powers itself: The better the music, the more people dance, the more electricity comes out of the floor.

The article notes that folks in Rotterdam have a vested interested in global warming as it would be one of the first cities inundated if sea levels rose. The company that makes the flooring is exploring expanding the concept to gyms and fitness centers.