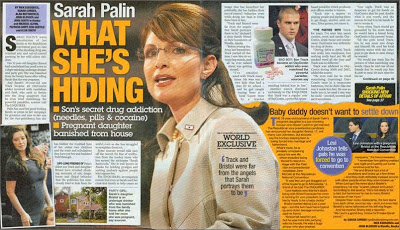 With the National Enquirer’s newfound credibility after the John Edwards affair, many are looking with interest to their expose’ of Sarah Palin. According to the story, Palin’s son Track, the Iraq-bound patriot, is a mainlining drug addict (Oxycontin!) who used to break into cars. And preggers Bristol was quite the out of control party girl herself.

The ENQUIRER has learned exclusively that Sarah’s oldest son, Track, was addicted to the power drug Oxycontin for nearly the past two years, snorting it, eating it, smoking it and even injecting it. And as Track, 19, heads to Iraq as part of the U.S. armed forces, Sarah and her husband Todd were powerless to stop his wild antics.

And as Gov. Palin has billed the state of Alaska for various expenses related to her children, as reported by The Washington Post, The ENQUIRER’s investigation reveals that she was so incensed by 17-year-old Bristol’s pregnancy that she banished her daughter from the house.

Another family friend revealed pre-prego Bristol was as much of a hard partier as Track was. “Bristol was a huge stoner and drinker. I’ve seen her smoke pot and get drunk and make out with so many guys. All the guys would brag that the just made out with Bristol.”

From Gawker, who has the print edition, here are some quotes from Track’s friends.

A Gawker commenter notes, “It’s a sad, sad day when the Enquirer is the most hard hitting reporter in the nation.” As for Track, he sounds pretty much like the typical drug-fucked teen who gets sent into the Army to get straightened out. Only this teen’s mother is being heralded as the ultimate role model for American families. The Palin family is a Yankee Doodle disaster.