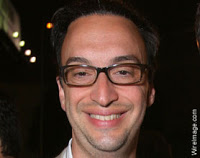 Paul Colichman, the new owner of The Advocate and Out Magazine, tells Page 6 about watching Barack Obama at last week’s Saddleback Forum.

“I’m a die-hard Democrat,” he tells Page Six. But Colichman was also a die-hard Hillary Clinton supporter. He and Harry Thomason produced a documentary, “The Hunting of the President: The 10-Year Campaign to Destroy Bill and Hillary Clinton.”

Colichman, 46, who owns The Advocate and Out magazines, GayWired.com, and Here, the premium cable network for gays, said he finally dealt with his disappointment over Clinton’s defeat last week and came around to Obama. “I thought, ‘Get over yourself!’ I had literally written out a check to the Obama campaign. And then I saw him in front of an evangelical group in Anaheim,” he said.

Before Rick Warren at the Saddleback Civil Forum, both Obama and McCain defined marriage as a union between a man and a woman. “I thought, ‘Wow! He just threw the gay community under the bus,’ ” Colichman said. “My partner looked over at me, and we tore up the check.”

Colichman, who also makes nongay movies and TV shows with his Regent Entertainment in Westwood, Calif., isn’t overly concerned that by withholding his support for Obama, he might help McCain win the White House.

“If we always vote for the lesser of two evils, if we accept their crumbs and platitudes, if we write checks to candidates who don’t stand up for us, aren’t we being self-destructive?” he argues. But other gay activists say Colichman’s just a sore loser. “Obama is much more gay friendly than Hillary ever was,” said one. Clinton doesn’t support gay marriage, either.

As Colichman was a producer of a pro-Hillary documentary, he is obviously plugged into the political world and it therefore strains credulity that he only just realized that Obama does not support gay marriage.