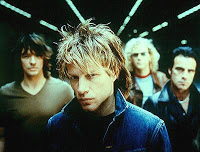 You Give Peace A Bad Name Remember during the 2004 Republican National Convention when anti-Iraq War activists were denied permission to use Central Park’s Great Lawn because it would damage the grass?

Well, apparently peace activists are considered more likely to rip up sod than rock fans. Bon Jovi has just been given the OK for a July 12th free concert for 60,000 on the Great Lawn. The concert is a precursor to baseball’s All Star Game which takes place at Shea Yankee Stadium.