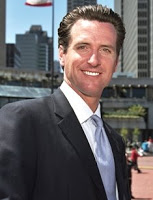 Riding high in popularity with the recent gay marriage triumph, San Francisco Mayor Gavin Newsom has filed the paperwork to begin his run for governor of California in 2010.

Newsom, a Democrat best known for challenging California’s ban on same-sex marriage in 2004, is six months into his second and final term, which expires in 2011. Speculation over whether he would run to succeed Gov. Arnold Schwarzenegger has pursued him since before his re-election, but the mayor always deflected it by saying his attention remained fixed on the city.

The establishment of an exploratory committee will allow Newsom to start raising money and conducting polls. In announcing the committee Tuesday, Newsom’s campaign consultant, Eric Jaye, said it demonstrated the mayor’s custom of “listening to people before acting” and that would allow him to launch a campaign “from a position of knowledge and strength.”

Newsom made headlines early in his first term when he directed city workers to grant marriage licenses to gay couples, three months before Massachusetts became the first U.S. state to legalize same-sex marriage.

Some Democrats, including California’s senior U.S. senator, Dianne Feinstein, blamed him for helping fuel a conservative backlash that propelled President Bush to re-election that same year, while some political observers speculated that he may have irrevocably doomed his chance to secure a statewide office.

At the moment, the only other Democratic candidate that seems likely to challenge Newsom is former Gov. Jerry Brown, who is currently state Attorney General. Brown is 30 years older than Newsom.

Previous Rubyfruit To Close
Next You Give Peace A Bad Name