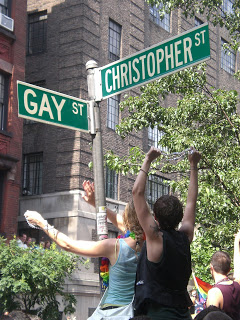 I finally found my memory stick from Pride 2008, so here’s a quick photo recap of the day. Our gang gathered at the corner of Christopher & Gay, as always, and while the intermittent rainstorms drenched the crowd and the marchers, each crack of thunder only brought a joyous roar from attendees and nobody seemed to flee.

Below are the first few Dykes On Bikes, rainbow flag creator and grand marshall Gilbert Baker coming over to greet us, Eric Leven waving from one end of Gilbert’s banner, crowd favorites the gay cops, assorted hotties and flamers, a family photo courtesy of Father Tony, and some baby Dominican dykes having a party stomping in the puddles. ABOVE: Pier Dance was mobbed with its usual 6000 happy men. BELOW: Gorgeous DJ Tracy Young likes to come out from behind her turntables and work the front of the stage. ABOVE: Eric Leven, bookended with handsomeness. BELOW: My longtime pal Mark Fernandez, looking just as he did when we were tearing up the clubs of South Beach twenty years ago, damn him. My buddy Ned and I happened to be trapped against the front of the stage when Pier Dance headliner and Oscar winner Jennifer Hudson closed the day with a three song set including her new single Spotlight and, of course, And I’m Telling You. I got sweated on by an Oscar winner! I think you can spot Ned and I in the clip below that a party attendee has YouTube’d. Hudson seemed to have a great time and turned the mic over to the audience many times.

The perfect day (made more so by the rain, somehow) ended with the usual fireworks show, only this year the fireworks barge began firing shells when it still quite downriver, only finishing the show when it actually got up to the pier. Curious. Thanks to all my pals and all the JMG’ers that I met for such a great day. And here’s a couple dozen more pics from the previous night’s Blowoff, in case you want to oogle some furry monsters and rock stars.