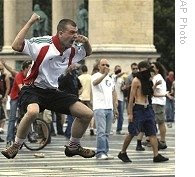 Neo-Nazis disrupted the Budapest Pride parade this weekend, pelting marchers with stones and eggs and hurling fire bombs at police. Police were forced to use water cannons and tear gas to disperse the protesters.

Right-wing extremists hurled stones and eggs at a Gay Pride procession in the Hungarian capital on Saturday before clashing with police called in to protect the marchers. Police arrested more than 40 of the assailants, who threw firebombs at the officers and set alight a police minibus. At least five persons were injured, two of them policemen.

A jazz concert due to be held at the end of the rally was cancelled for security reasons. Politician Gabor Horn, a leading member of the liberal Association of Free Democrats (SZDSZ), said he was spat upon, slapped and doused with beer by neo-Nazis.

It was the worst violence during the 12 years the Gay Pride parade has taken place in Budapest.

Hundreds of of extremists gathered along the route taken by the 1,500 marchers to give vent to their anger at gays and lesbians. In the days leading up to the parade, calls were made on Neo-Nazi internet forums for violence to be used against the “unnatural perverts.”

No marchers were injured. Parade organizers had prepared them for the protests by advising that they carry umbrellas or wear helmets to protect themselves from hurled objects.

“There was one street where literally a shower of eggs and stones was poured on us,” Gábor Kuszing of Hungarian human rights group Patent Association said. “I was lucky to have a placard in my hand, and others used umbrellas, but most people just came in their regular clothes.” Organisers advised participants to carry large umbrellas or wear helmets.

“This is outrageous and shameful that some 20 years after the change of regime, this is what we have … such intolerance,” Socialist European Parliament member Katalin Levai told Reuters after a stone smashed the window of a police car she was being escorted in.

“It was great to see the police protecting us, after the police chief tried to ban the march earlier,” Mr Kuszing commented. “The fact that the police were protecting us is an important message to the neo-Nazi criminals and the public at large.”

Quite the contrast to the post below, isn’t it? Count. Your. Blessings.

Previous Pride 2008 Photo Recap
Next The Stall Of Fame