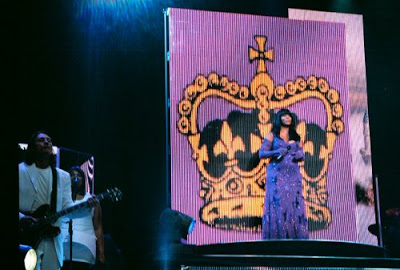 Yesterday afternoon, with even the lure of a free ticket unable to entice any of my Manhattan-centric friends to embark on the travel science project that is a trip to Nassau County on Long Island, I headed alone to the Donna Summer concert at Jones Beach. About 2 1/2 hours into my mistake-laden journey (6 train to the 7 train to the F train to the E train to the Long Island Railroad), I finally found myself on the concert-bound shuttle bus which pulled onto the beach causeway and almost immediately got stuck in a miles-long traffic jam. Luckily, I had the animated and fun company of a couple dozen fellow Donna fans. And since the guy sitting next to me didn’t have a ticket yet, bingo, I had a seatmate for the show. Thanks, Tom!

BELOW: Tom and our concert/train buddies. We walked into the amphitheater just as Summer took the stage, opening with my favorite track from her new album Crayons – the suitably titled The Queen Is Back. Over the 20-song set Summer leaned heavily on Crayons, performing ten of its twelve tracks. That was probably disappointing to much of the audience, as it was to me. Save 1977’s I Feel Love, nothing from Summer’s classic first five albums appeared. Sob.

And with the exception of 1999’s gorgeous Con Te Partiro, neither did anything else post-1982’s She Works Hard For The Money. I suppose you can’t blame Summer for ignoring the past 25 years of her catalog, she does have a new album to sell. Tom, in particular, was hoping for something from her 1989 Stock-Aiken-Waterman comeback, Another Place And Time. Pity. With the above noted exceptions, basically the concert was Donna Summer 1978-1980 + Crayons. But she did sound incredible. That voice. That incredible, powerful, pitch-perfect, unmistakable voice.

Summer managed at least six or seven costume changes during the show, occasionally leaving the stage to her trio of acrobatic male dancers. Summer’s sister and regular back-up singer, gospel singer Mary Gaines Bernard, ably took Barbra Streisand’s part during No More Tears (Enough Is Enough). Later Bernard took the stage solo during one of Summer’s costume changes to perform her single Say Love, putting an end to Summer’s atrocious nod to her current hometown of Nashville, a bizarre country accent-laden skit done as the intro to Slide Over Backwards. Oy vey. Trivia: Mary Bernard Gaines was part of the disco trio Sunshine, whose 1979 track Take It To The Zoo appeared on the soundtrack to Thank God It’s Friday.

Notably, Summer did not employ the giant video screens at Jones Beach, instead relying on a rather fabulous electronic backdrop to provide visual interest. Fans seated near us speculated that perhaps Summer did not want her now ample backside blown up to movie screen proportions. Give her a break, people. She’s a 59 year-old grandmother! It would have been nice to actually see her, although I guess we’re all spoiled by those giant screens these days. (Tom and I did get a chuckle over the audience, which seemed to be 80% Long Island matrons with big frosted hairdos. It was a giant outdoor disco hen party. Um, plus a few hundred middle-aged gays.)

About six weeks ago, Aaron and I were privileged to attend a Donna Summer mini-concert in the very intimate XM studios at Lincoln Center for a performance/interview show called Artist Confidential, where the small audience was seated on folding chairs mere feet away from Summer and her 10-piece band. Infinitely cool. Prior to that, the last time I saw Donna Summer in concert was in 1979 at the St. Petersburg Auditorium. After the St. Pete show, about 90% of the 16,000 concert attendees (including us) tried to get into the one gay disco in town. Giving up on the blocks-long line, we decided to hit El Goya in Tampa before getting on the interstate to Orlando. I think I got home quicker in 1979 than I did from Jones Beach last night. Despite all the above kvetching, it was still totally worth it.

Jones Beach Set List: The Queen Is Back, I Feel Love, Dim All The Lights, Con Te Partiro, I’m A Fire, Sand On My Feet, On The Radio, Mr. Music, Crayons, [Intermission], No More Tears (Enough Is Enough) w/ Mary Gaines Bernard, MacArthur Park, Be Myself Again, Stamp Your Feet, Slide Over Backwards, Say Love (performed by Mary Gaines Bernard), She Works Hard For The Money, Bad Girls, Hot Stuff. ENCORE: Fame (Is Back), Last Dance.

Video: Donna Summer and Mary Gaines Bernard singing No More Tears (Enough Is Enough), then Donna solo on MacArthur Park. You can’t see much of them due to the distance, but you can get an idea of the staging and hear their voices.