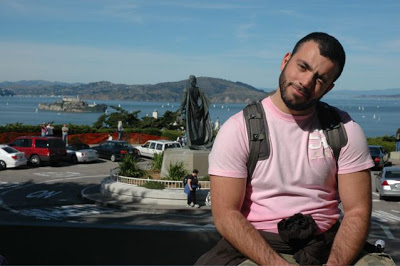 Ahmet Yidlz, a 26 year-old old gay man, was murdered in Turkey last week in what some are calling the country’s first gay “honor” killing.

In a corner of Istanbul today, the man who might be described as Turkey’s gay poster boy will be buried – a victim, his friends believe, of the country’s deepening friction between an increasingly liberal society and its entrenched conservative traditions.

Ahmet Yildiz, 26, a physics student who represented his country at an international gay gathering in San Francisco last year, was shot leaving a cafe near the Bosphorus strait this week. Fatally wounded, the student tried to flee the attackers in his car, but lost control, crashed at the side of the road and died shortly afterwards in hospital. His friends believe Mr Yildiz was the victim of the country’s first gay honour killing.

“He fell victim to a war between old mentalities and growing civil liberties,” says Sedef Cakmak, a friend and a member of the gay rights lobby group Lambda. “I feel helpless: we are trying to raise awareness of gay rights in this country, but the more visible we become, the more we open ourselves up to this sort of attack.”

“From the day I met him, I never heard Ahmet have a friendly conversation with his parents,” one close friend and near neighbour recounted. “They would argue constantly, mostly about where he was, who he was with, what he was doing.”

The family pressure increased, the friend explained. “They wanted him to go back home, see a doctor who could cure him, and get married.” Shortly after coming out this year, Mr Yildiz went to a prosecutor to complain that he was receiving death threats. The case was dropped. Five months later, he was dead. The police are now investigating his murder. For gay rights groups, the student’s inability to get protection was a typical by-product of the indifference, if not hostility, with which a broad swathe of Turkish society views homosexuality. The military, for example, sees it as an “illness”. Men applying for an exemption to obligatory military service on grounds of homosexuality must provide proof – either in the form of an anal examination, or photographs.

“The media ignores or laughs off violence against gays,” says Buse Kilickaya, a member of the gay lobbying group Pink Life, adding that Ahmet Yildiz’s death “risks being swept under the carpet and forgotten like other cases in the past”. Turkey has a history of honour killings. A government survey earlier this year estimated that one person every week dies in Istanbul as a result of honour killings. It put the nationwide death toll at 220 in 2007. In the majority of cases, the victims are women, but Mr Yildiz’s friends suspect he may be the first recorded victim of a homosexual honour killing.

“We’ve been trying to contact Ahmet’s family since Wednesday, to get them to take responsibility for the funeral,” one of the victim’s friends said yesterday, standing outside the morgue where his body has been for three days. “There’s no answer, and I don’t think they are going to come.” The refusal of families to bury their relatives is common after honour-related murders.

The above photo of Ahmet on vacation in San Francisco was sent to me by a close friend of his.