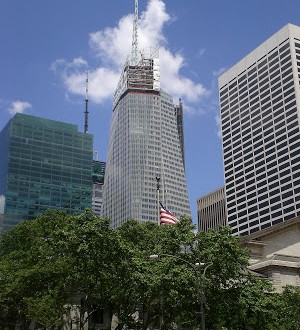 Hmm, when I mentioned the onset of construction of the new Bank Of America Tower back in August 2006, it really seemed like it would turn out, I don’t know, good. I know it’s not really finished, but still, I’m not feeling it yet.

The building topped out back in December when the spire was added, making it the second tallest building in NYC and the third tallest in the country. It only has 54 stories versus the 77 stories of the nearby Chrysler Building, but somehow the BOFA Tower’s roof is 19 feet higher. The spire is 150 feet higher.

The BOFA is supposed to be the greenest skyscraper ever built – constructed mostly of recycled and recyclable materials. Rainwater will be captured for use in the coolant system and the air vented by the HVAC will be filtered and leave the building cleaner than when it came in. So says the hype, anyway.

Previous Bearforce1 – Shake That Thing
Next HomoQuotable – Will Bower