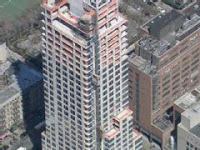 Curse Of The Upper East Side Strikes Again A man fell to his death at a construction site on the Upper East Side on Monday. The incident happened at 67th Street and 1st Avenue at a building called The Laurel. Police said they responded to the fall at around 10:32 a.m. The 24-year-old man fell from the 23rd floor to the 14th floor balcony, police said.

The medical examiner’s office was determining the cause of death. Police said they are continuing to investigate what led to the fall. A preliminary investigation revealed that the construction site had 38 violations, including 36 “Grade A” violations, which are the most hazardous, according to Manhattan Borough President Scott Stringer. Stringer called the finding an “outrage.” Construction workers laid flowers at the site.

How can a building with 38 Grade A violations still have workers on it? This happened over on Dr. Jeff’s block and he reports that someone in his office saw the body fly past their window.

Previous Serbia’s Eurovision: Too Dangerous For Gays To Attend?
Next McCain’s Girls A Hoax