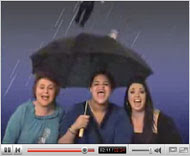 Speaking of raining men, the NY Times is reporting that the “McCain Girls” video that cracked us up here a few weeks ago is a hoax.

John McCain says the “McCain Girls,” a trio of singing and dancing campaign supporters, are wonderful and entertaining. True believers or not, these women were paid to sing “It’s Raining McCain.” Given his flair for irony, it’s a little hard to tell whether he gets the joke.

The McCain Girls videos, which were posted on YouTube last month with no clues about their provenance, are clearly meant to be imitations of — or parodies of — the “Obama Girl” videos, which themselves are parodies (right?).

While the Obama Girl looks like a pinup and sings catchy tunes, the McCain Girls could not be confused with fashion models or pop music stars. Their first video, “Raining McCain,” set to the tune of “It’s Raining Men,” was posted on YouTube four weeks ago. A sample lyric: “In the 2008 election, the forecast calls for rain; the first time in history, it’s gonna start raining McCain.”

That video recorded more than 1.6 million views and earned mentions on CNN and on ABC’s “Good Morning America,” with people alternately mocking it and wondering who was responsible. The singers seemed intentionally bad, which led many bloggers and YouTube commenters to assume that it was meant to insult Mr. McCain.

Drum roll, please: The creators of the McCain Girls turn out to be the comedy team behind 23/6, a five-month-old Web site owned by an affiliate of IAC/InterActiveCorp that parodies the news. The site, at 236.com, uses the motto “Some of the news, most of the time.” Indeed, the videos’ makers say they were trying to tread the line between sincerity and irony. “We wanted to parody the campaign-song phenomenon,” said Sarah Bernard, the president of 23/6. Because most of the so-called stars of YouTube are amateurs, the comedy site decided to take no credit for its creation.

Previous Curse Of The Upper East Side Strikes Again
Next I Can Haz Shark For Teh Jumpen?