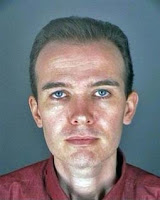 One-time Jon-Benet Ramsey murder suspect and batshit loon John Mark Karr told the Bay Area Reporter this week that the reason he was in Thailand when police caught up with him was that he was seeking gender reassignment surgery to alter his appearance enough to elude capture. Karr says he doesn’t have any “driving desire” to become a woman and that he was in Thailand merely because of their expedited process for transitioning. When arrested last year, Karr said that he’d been taking female hormones to change to appearance of his face.

In the B.A.R. interview, Karr still brags that he murdered Jon-Benet, claiming to have buried a “Gothic box” with the dead child’s panties inside and that if found, the box would result in his re-arrest. Police and psychiatrists believe that Karr is a mentally unstable publicity-seeker. (No shit, really?) Sexologist Carol Queen says the news of Karr’s MTF plan could reinforce public perception that transsexuals are “deceivers”.

Previous Craigapalooza
Next NYC Knows Where You Are